So, we’re cruising down the *ahem* beautiful highway of West Virginia (no offense WV peeps), and all of a sudden my oil pressure drops really low and the light and buzzer on the dash start going off.  A few seconds later the pressure returned to a more normal number and light/buzzing stopped.  Whew!  I was hoping my “ignoring things and they’ll fix themselves” policy would work!  Unfortunately it didn’t as the light and buzzing happened a couple more times going up and down the hills on the highway.  We were getting close to our destination for the night and since the warning lights weren’t staying on I figured I could make it to our destination without risking too much, so I did. 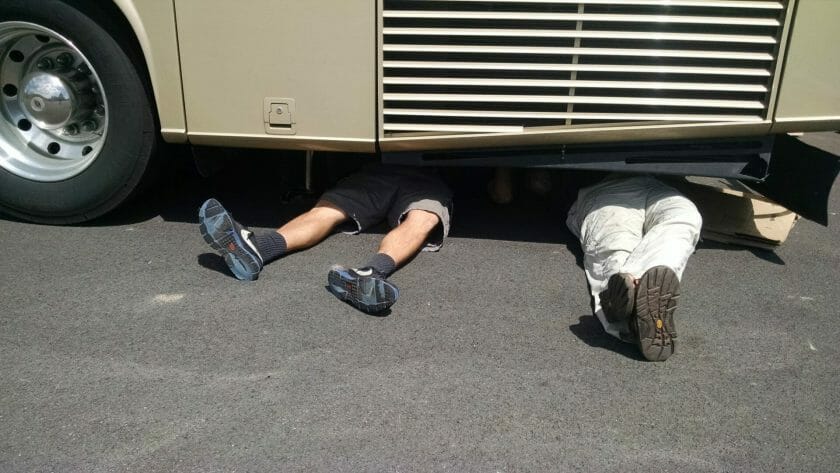 We were staying in the parking lot of the Tamarack Visitor Center in Beckley that night.  We had plans the next day of leaving the rig in the parking lot and driving the car to New River Gorge for a day of hiking.  After we parked and got settled, I went out to check out the situation.  First thing I did was check the oil level.  I pulled out the dipstick (I love that word) and it was bone dry.  Well, that’s not good!  I last had an oil change about 6 months before this and I wasn’t even close on my mileage, so I don’t know where all the oil went.  Next I grabbed a flashlight and crawled under the rig to see if there were any leaks or any other strangeness.  I fully admit that when it comes to cars/engines/etc., for the most part, I haven’t the foggiest.  I consider the fact that I haven’t put unleaded gasoline in my diesel rig a small victory in my life.  So I don’t know what I was expecting by crawling under to look at the engine, but I did anyway.  After laying on the ground for a while looking around and regaining focus after thinking about the 32,000 pound RV sitting just inches above my head and body, I didn’t really see much.  Then, I saw it!  There was a quarter sized hole between the engine and the transmission that looked to have crusted oil on it.  The hole was threaded, and was definitely meant to be there, but I couldn’t figure out why it wasn’t plugged.  So I figured that’s where the oil spilled out of.  Problem solved!  Tomorrow I’d find a place that knows what the hole in that thingy-madoodle is, buy a new plug, fill up the oil, and I’d be off seeing New River Gorge by lunchtime.

I started searching around for big rig diesel mechanics.  We have a Cummins 350 ISL in our motorhome, so I knew it would be difficult finding something in the area.  Well, lady luck was on our side.  There was a truck service center about a mile from where we were parked!  It was late Friday night, so the service center was closed for the night and unfortunately closed for the weekend.  The good news was that their parts department was open Saturdays from 8am – 1pm.  So I decided to crack a beer and relax until then!

The next morning I called the parts department and explained my predicament.  It was kind of like I was speaking French to these thick accented Mountaineers.  After talking a bit, we deduced that the hole was for the drain plug in the drain pan and we must have lost the plug somewhere along the way.  They didn’t have a replacement drain plug at this parts center (of course), but they did have one in Charleston, WV, which was about an hour away.  In my head I started waving goodbye to New River Gorge.  I went back under the rig for another look in the daylight.  It didn’t make sense that the drain pan would have dumped over 5 gallons of oil on the highway and I didn’t notice it.  As I said, I’m no mechanic, but this would have been hard to miss.  Looking under the rig again, there were no splashes of oil, nothing on our car that is towed behind us either.  I also was able to figure out where the drain pan actually was and confirmed the drain plug was still there.  So, back to the drawing board 🙁

Since the service center was closed and I didn’t want to waste our entire day searching around for an open one, I decided I’d do an impromptu oil change right there in the parking lot.  I planned on starting to do my own oil changes since the last one I had done costed $500!  I just thought I’d be doing it in a nice quiet campground backed into a private site, not in the middle of a busy parking lot!  Ah well, time to jump in!

By this time the kids were out running around and our friends Jen and Drew from Free2Breathe were over checking things out.  Drew volunteered to give me a hand, so we took a ride over to the service center to get some fresh oil and a new oil filter.  We walked out with 7 gallons of Rotella T and a giant filter.  Now all that was left was getting our hands dirty.

We crawled under with a 5 gallon bucket and a wrench.  We got the drain plug out and drained all the remaining oil.  I’d estimate there was about 2.5 gallons of oil that we drained.  I didn’t warm the engine, which since then I’ve read is a good idea to do (heats and thins the oil so it drains easier).  We replaced the drain plug and next set our sights on the filter.  It was in a real tight spot, like they always are, and wasn’t budging when we both tried loosening it with just our hands.  So off we went to AutoZone to get an oil filter wrench.  I brought along the new filter, just to be sure we got a wrench big enough to fit around it.  Luckily they had one that just barely fit.  We got back to the rig and struggled a bit to get the filter wrench in place…then struggled a bit more to get the filter loose, but we finally did!  There was about a quart or so of oil in the filter, so all together less than 3 gallons came out…Not sure what happened to the other 2+ gallons that went in, but wasn’t going to worry about that now.

We poured some fresh oil into the new filter, greased the gasket and screwed the filter in place, just hand tightening this time.  Now we were ready to fill the rest of the oil.  Drew had a handy flexible funnel that worked pretty well.  He held the funnel and I poured.  The oil fill spot wasn’t in the easiest place to pour a gallon container into, but we made due.  I ended up pouring in almost 6 gallons of oil to get the dipstick (hehe) to the full line. 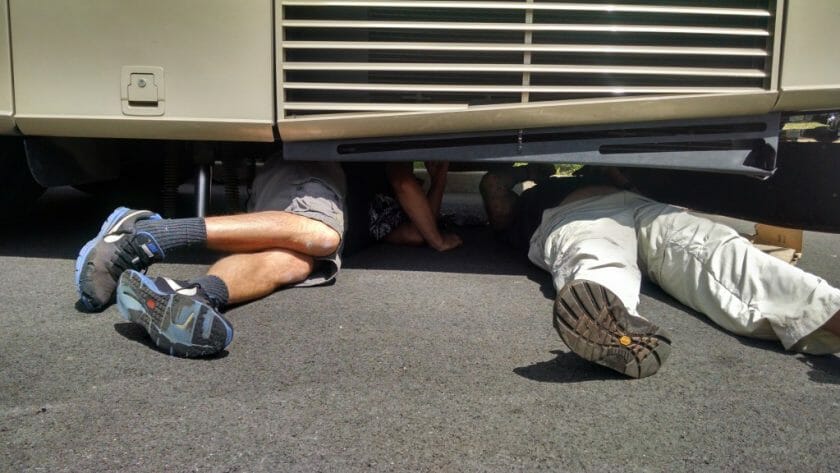 After disposing of the old oil properly back at AutoZone, we were done.  I fired up the rig and the oil pressure looked great and I was good to go for another 15k miles or so.  All for under $200!

Big thanks to Drew for turning a stressful situation into fun and educational one!  I owe you one man!